A common species in semi arid and temperate areas of inland north eastern Australia, usually growing in monsoon forest or dry scrub but not near well developed rainforests.  Growing as a small tree to 15m with masses of moderately dense yellow flower spikes from mid July. This species is endemic to Australia occurring in the Northern Territory, north east Queensland, south east Queensland and inland Queensland.

A frost and drought tolerant tree to 20m preferring alluvial flats, midslope terrain or depressions with seasonal water flows and occuring in Queensland, New South Wales and Victoria.  Cream flowers occur Nov-Dec and seed capsules persist on the tree until at least the following Summer.  It is an important species for the honey industry as it is a good nectar/pollen source and produces a durable timber and is a good choice for natural shelter or shade.

Endemic to Australia from north east Queensland and southwards to coastal central New South Wales.  It is an evergreen, medium sized, long lived tree with good pest resistance and also tolerant to drought, smog and poor drainage.  In its natural environment, this species can reach heights of 40m but more likely 10-15m in cultivation, with beautiful thick dark glossy leaves which are paler beneath, the bark is smooth and cream coloured which peels in flakes seasonally to reveal orange-brown tones.  White flowers appear in three's and attract bees, this is also an important food plant for the larval stages of the Common Red Eye, Rare Red Eye and eastern Flat Butterflies.  This is a favoured choice as a street tree, great shade tree option and a popular flooring timber in New South Wales and southern Queensland.

A widely distributed and common species to large parts of eastern and south eastern Australia including Queensland, New South Wales, Canberra, Victoria, Tasmania and south east South Australia and has also naturalised in coastal areas of south west Western Australia and other parts of South Australia.  This is an ornamental species in wetter areas, timber is commonly used for wood crafts, plantation species, shelter for stock and shade tree.  This Acacia is usually an upright tree to 20m with blackish grey deeply fissured bark, dark green to grey and slightly leathery leaves and pale cream fluffy globular flowers occur in Winter to Spring.  The seed pods are elongated, slightly flattened and twisted, green and leathery when young and then turn reddish brown as they mature.  When ripe, these open to release seeds and become very twisted.  Inside these are shiny black seeds that are almost totally encircled by a large pink-red aril.  This species is long lived, nitrogen fixing, moderately salt tolerant and exhibits provenance variation in regards to frost tolerance and growth performance.

This is the most commonly cultivated Brachychiton species as it has such spectacular bright red flowers on leafless branches.  A medium tree to 35m but often much less in cultivation especially in cooler areas, it has deeply lobed large leaves and these fall before flowering in early Summer, however the deciduous nature of the tree is variable.  It is hardy to a wide range of soils and suited to temperate to tropical areas.  Seeds are best collected wearing gloves and eye protection as they are surrounded by irritating hairs in a honeycomb like husk inside the seed pod.  This species is a wonderful amenity plant or street tree with highly ornamental value.

Native to south east Queensland and eastern New South Wales this Eucalypt is a long lived, medium sized tree to 25m with an open crown, grey-green thick foliage and smooth bark that is shed in irregular patches leaving a multi coloured appearance consisting of grey, orange and light brown.  White flowers appear in December to February, these attract nectar feeding animals including flying foxes and birds and the larger trees develop hollow bearing branches which are very important for a wide range of fauna species, including Koalas as this is an important Koala food tree.

An erect tree, usually 10-15m in height with dense foliage and a spreading crown, the foliage is a beautiful silvery green and phyllodes are sickle shaped.  This species is quite impressive at night when the foliage shimmers in the moonlight.  The hard furrowed bark is blackish grey in colour and it is often used for its timber, in mine site and roadside land rehabilitation.  This is a very highly tolerant species to salinity and also has good capability for regeneration after fire as it sprouts form the butt, roots and living stems in response to fire damage.  This is an unusual Acacia species as it isn't hard seeded amd germinates readily without the need to break seed-coat imposed dormancy.

This species is native to eastern Australia from Cape York Peninsula, north east Queensland and south west to central New South Wales, as a slow growing erect spreading tree to 35m tall.  It has rough furrowed grey bark, leaves are grey green and small white flowers appear from late Autumn to Spring.  It produces a durable strong timber, useful as a nectar tree for birds and honey and also is a Koala food tree.

This species is commonly found growing on the coastal areas and plateaus of eastern Australia from New South Wales, Victoria and Tasmania, can be quite variable in habit depending on provenance, there are some weeping and erect forms.  A hardy plant, which can form dense thickets are usually 2-3m in height with fibrous, furrowed bark and mass sprays of 'fluffy' small white honey scented flowers in September to November, small green linear leaves are produced on short stalks and the seed capsules are very distinctive and remain on plant only until the fruit matures.  Native animals can often be found sleeping under Kunzea plants where they are seeking relief from ticks and other parasites, hence the common name, Tick Bush.  This species is very ornamental and also used in the essential oil trade, useful for attracting wildlife including birds and beetles also used for land regeneration.  Propagates very readily from seed or cuttings.

This is an attractive, slow growing, easy to grow and very interesting plant, not actually a true palm but a semi deciduous or deciduous semi tropical succulent stemmed tree growing to 1.8 - 2.5m tall, but often much smaller in cultivation.

It's stem/trunk is grey green with long thorns to 6cm long and has simple green leaves which are arranged spirally at the top of the stem/trunk. This species usually only produces a solitary trunk but branching can occur as a result of natural injury or in older specimens.

Plants only flower when mature, which is usually at 1.8m tall in Spring to Summer seasons - spasmodically through the warmer months, these are white with yellow centres and are aromatic, then followed by seed pods that resemble cucumbers which are filled with many white winged seeds.

A beautiful species which is sure to attract attention in any garden!  We have been very lucky to be able to source seed, so please let us know if you'd like to order - we are offering it to our customers @ $110/1000 seeds.We look forward to hearing from you. 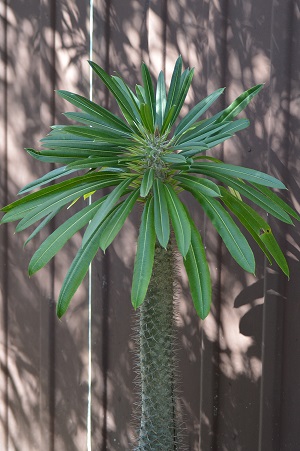 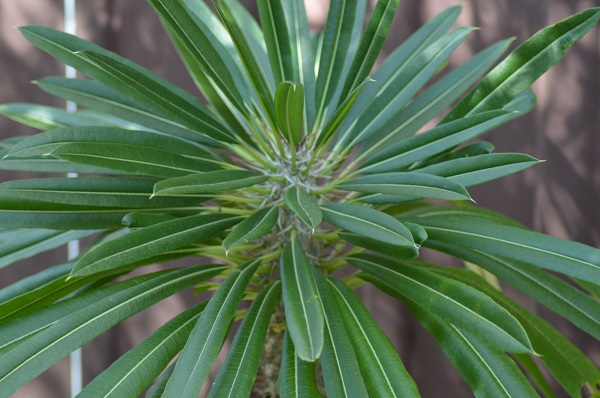